In snowy Hochfilzen the women had a great showdown at the 4x6-km-Relay and in the end the German’s won again. 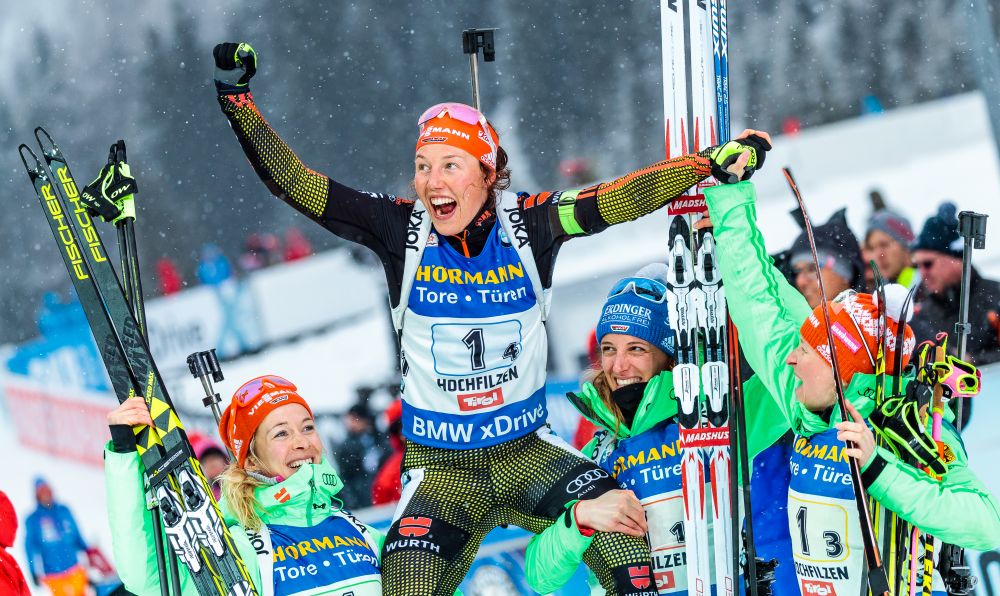 In the beginning the race developed just like expected. The athletes from France, Italy, Germany and the Ukraine switched frequently in the lead. After the second hand-over the race added up on excitement – especially due to Franzi Hildebrand’s (Germany) good performances on the loop and on the shooting range as well as a shooting problems of French athlete Justine Braisaz. All of a sudden Alexia Runggaldier who finished third in the Individual race was able to move up. Hildebrand shot clean standing though and was able to open up a gap.

Multiple winner Laura Dahlmeier missed onebut  hit the extra shot so she was able to keep an arm’s length on her Ukraine follower Olena Pidhrushna. Besides the Ukraine also France and the Czech Republic left the range without mistakes which lead to a great fight for position two and tree on the last loop. Pidrushna attacked at the last uphill and overtook Marie Dorin Habert (France) as well as Gabriela Koukalova (Czech Republic). After the past races the Czech girl apparently was not able to give it her all so gold was taken by Germany, with position two the Ukraine made their first medal (silver) and after the Mixed Relay silver medal the French ladies took bronze.

The performance of the Austrians was disappointing: Julia Schwaiger’s first start in a World Championship race did not go according to plan. After one bullet fell into the snow at her standing shooting she illicitly reloaded her rifle four times and therefore caused dubiety. As for each athlete it is only allowed to use up to six spare rounds in total, the IBU disqualified the Austrian Relay after Schwaiger’s second shooting.

Maren Hammerschmidt (Germany): "I was a bit nervous, the muscles in my legs are dead now that’s why I am satisfied with my clean shooting."

Olena Pidhrushna (Ukraine): “During the last loop I was remembering the past year all the time. When I overtook the girls under the bridge I knew I had to fight for the medal and I’m luckily it worked out.”

Marie Dorin Habert: “I am really happy about this medal with my team. For me it was a very stressful last loop because I was aware of Gaby being just behind me – she is top this season. So my loop was not very easy to make.”

Julia Schwaiger (ORF Intervew): “I had a blackout. I miscounted. I have no explanation, as a markswoman I should have a feeling for that. Maybe I was too emotional. I’m so sorry for the team. Beeing at the starting line was such a pleasure for me I was so excited. Emotionally I’m done now.”