Three days before the end of these Biathlon World Championships in Hochfilzen, the Men’s 20K Individual ended with a sensation! In an extremely thrilling competition US athlete Lowell Bailey unexpectedly won the very first biathlon Gold medal for the USA. 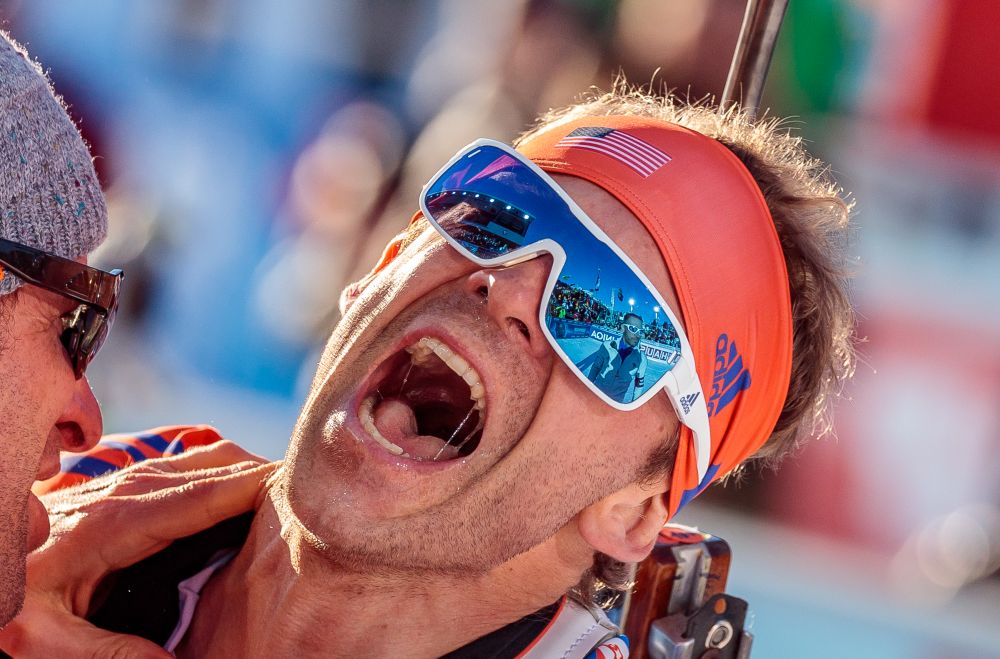 The US Team’s extensive jubilance did not come to an end when Lowell Bailey, who unluckily was placed fourth in the Sprint, repeated his clean shooting in front of 15.300 excited fans and sensationally fulfilled his dream of winning a World Championship title. Until the last interim time the US boy was only a tenth of a second ahead of his Czech competitor Ondrej Moravec, who also shot clean. In the end, Bailey mobilized all his power and crossed the finish line with a lead of 3.3 seconds. Of course, his wife Erika and his baby daughter Ophelia Jane were amongst the first congratulators. Although French top star Martin Fourcade performed well on the course as usual, he gave away his chance to win by having one missed target per standing shooting and therefore only achieved Bronze.

Until the fourth shooting it seemed as if also Austria could win a medal, but with his second penalty at the standing shooting Simon Eder dashed these hopes and in the end was placed 12th. Although it was not the result the Austrians had expected, Eder, Daniel Mesotitsch (14th), Julian Eberhard (15th) and Dominik Landertinger (26th) nevertheless were able to improve their team performance.

Lowell Bailey: “I am waiting for someone to wake me up. It is just unbelievable – like a dream. For me this victory means so much because of the hard work that went into this medal. It is very special for me to share this moment with the staff behind me. The last loop felt like it was 40K long and not 4K long. Every member of our staff was screaming at me. I was a little bit upset with myself when I let the medals go away in the Pursuit because you don’t get that chance so often. This time I didn’t want it to happen again and kept going. My plan in sport now is to continue until next season for the Olympic Games. “

Ondrej Moravec: “It was an exciting competition. In the beginning it looked better for me, but at the last part of the loop I wasn’t so strong. I am so happy for Lowell to win the Gold medal because he is a good guy. Although I already won some medals, today I was really close to Gold. It was not enough. I shot well and did my best. Especially at the shooting range I tried to be mentally strong. It is a great feeling because this season so far was not perfect for me.”

Martin Fourcade: “It is never easy to win a competition. I could have done better but I’m really satisfied. Today I had less focus – that is a good lesson for the mass start. The warm conditions were tough, but as we are practising an outdoor sport we have to adapt to it. I don’t think that there was a big difference between the single starting groups. It is wonderful for Lowell to win today! Also for the Biathlon sport it is good to have people winning you didn’t expect.”

Simon Eder: "I had the chance to win the medal, I know, my performance on the track is fine. The mistakes do not upset me that much, but everything just has to match. I tried everything, I'm just lacking on some reliability. But that can change quickly. Maybe it works out on Sunday - I've worked hard to get that extra chance."

Julian Eberhard: "To get it to the point - in this race I have died in beauty. Some parts were very good, and on the course I did everything right, but for a medal an even better shooting performance would be required.”

Daniel Mesotich: "I am relatively satisfied. The one missed target bothers me because it was only somewhere slammed. With a penalty less I would have had another chance in the Mass Start. The performance basically was a confirmation for myself and gives me self-confidence for the Relay."