It was an intense sprint competition with a surprising winner. 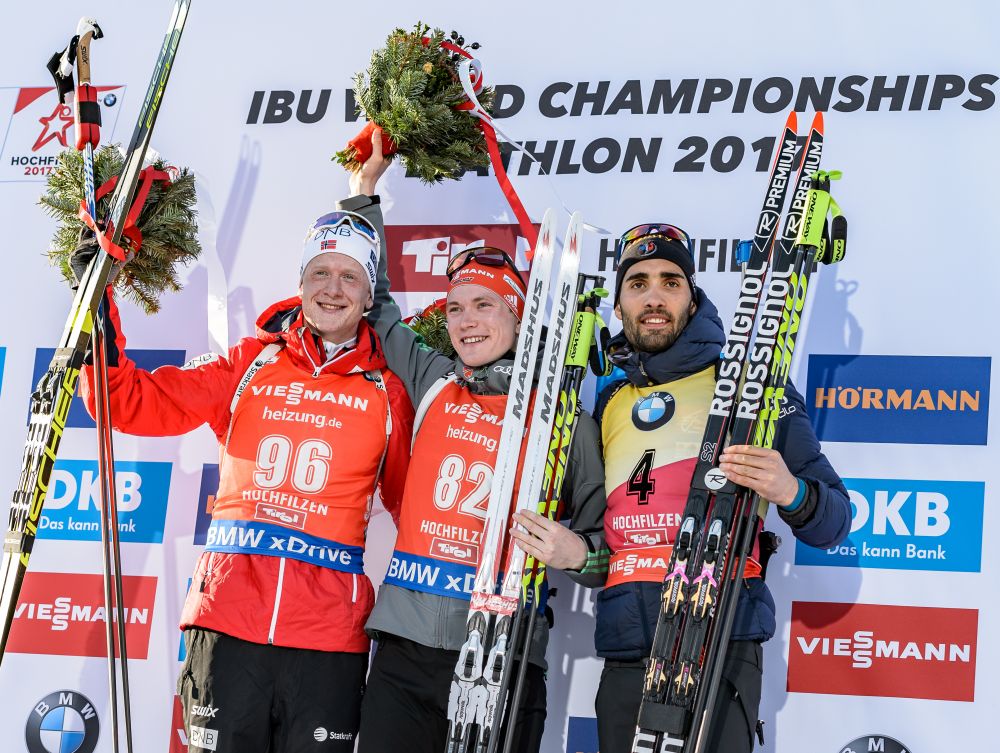 The first men’s race of the World Championships in Hochfilzen wasn’t for the faint-hearted. Martin Fourcade who started the race with bib number four was in the lead for a long time but then had to wait until the end of the race to be certain about winning at least the bronze medal. Two athletes had simply been better this day, especially at the shooting range. Benedikt Doll who sensationally won his first big race and therewith can call himself a world champion, as well as the Norwegian Johannes Thingnes Bø who was beaten by the German by 0,7 seconds. Very much to the pleasure of the 14.300 fans the Frenchman was in first position until number 82 (Doll) and 96 (Bø) started and both had clean shootings.

And the Austrians? Best position was taken by Julian Eberhard who finished seventh and with 35,5 seconds behind the winner still has chances for the Pursuit. The Austrian Athletes lost the race on the shooting range, everyone of them made mistakes. Surely Eberhard was frustrated the most as he ran the second fastest time on the loop and probably would have made the podium instead of Fourcade.
Local hero Landertinger (17.) was exhausted after the 10k but satisfied with his running performance although he did feel the three extra loops. Eder who again had the fastest shooting times also made three mistakes was 22nd in the end. His team colleague Mesotisch had a disappointing race today with his slow running time and finished 50th. Nevertheless all four Austrian athletes will be competing at the Pursuit.

Benedikt Doll: “This is an amazing moment after this exciting race. When I saw that Fourcade shot one mistake each I realized that I had a chance today. After the finish I had to wait and see as Johannes started chasing me but in the end I was the one celebrating.”

Johannes Thingnes Boe: "It is no fun to be second only because of a few hundredths – but I just didn’t have enough energy left. Nevertheless it was a good competition. My head wanted to win, but my legs unfortunately couldn’t keep up with it."

Martin Fourcade: "I am very happy with the result. After the shooting I hoped for a top-10 result - after the competition I already pictured a placement within the top 5. To be third in the end – that’s fine."

Julian Eberhard: "This was a great performance, but in order to achieve the ultimate goal, a medal, it was at least one mistake too much. Due to the warm temperatures and the deep condition of the run, the imposition was higher as usual. For Sunday this means full attack!"

Dominik Landertinger: "Today we had well prepared skis again and I felt good on the run, but at the shooting range I was just too restive. This is also due to the extreme imposition which was intensified by the high temperatures."

Simon Eder: "Three failed shots sound a lot, but in fact it wasn’t so bad. At the moment just small trifles distract me which causes mistakes. The positive aspect of today is that with regard to running I felt really good. For now it is the goal to reach a top-10 result at the Pursuit."