Hochfilzen is ready for the Biathlon World Championships

In about a hundred days (98 to be exact) the IBU World Championships Biathlon 2017 Hochfilzen will kick off. Today the Austrian Ski Federation and the Organizing Committee Hochfilzen entertained a press conference at the modernized biathlon stadium to present the state of preparation for Austria’s winter sports highlight. Starting it off, OC representative Franz Berger presented the most important facts of the upcoming World Championships.

In the course of the preparation for the IBU World Championships Biathlon 2017 the Biathlon Stadium Hochfilzen has undergone extensive construction work. The focus of the first construction phase was on the new team and service building housing 30 waxing cabins and dressing rooms respectively and which has already passed its final rehearsal during the 2015 December World Cup. Moreover, a state-of-the-art 570 m² indoor shooting range that will be housing the media center during the world championships was built. With the new main building the third and final piece of infrastructure was completed only a couple of days ago. Beside numerous offices and installation rooms, it houses the grand stand for the VIP guests as well as several TV commentator booths.

Prof. Peter Schröcksnadel (President of the Austrian Ski Federation): “It is not easy to bring world championships to Austria. However, we have succeeded in doing so and through good cooperation we have created an excellent infrastructure for these international championships. I would like to thank the Department of Sports, the Austrian Armed Forces, the State of the Tyrol and the village of Hochfilzen a lot for their support. I am very happy that a modern training and competition facility which will also serve young talents as well as other sports has been developed here. Of course, the world championships also constitute a giant boost for the tourism sector in the entire region.”

MajGen Mag. Andreas Pernsteiner (Commander Support & Logistics DoD): “A soldier without sports is inconceivable. Top-class sport also constitutes a role model for soldiers. Successes of Austrian sports men and women establish identity and therefore further a socially inclusive national defense. The Project Hochfilzen has been financed by the State of the Tyrol, the Department of Sports as well as the Austrian Armed Forces and has been built by the military’s construction outfit (MIMZ) with a project budget of 21 million Euros. Of the 17 companies involved in the construction work, 16 companies were Austrian-based and of those 6 came from the Tyrol.”

Dr. Klaus Leistner (Vice-President of the International Biathlon Union): “The IBU considers Austria and Hochfilzen traditional turf. The first Biathlon World Champions ever have been held in Saalfelden in 1958 and Hochfilzen has already been host to the Biathlon-WCH in 1978 and 2005 as well as to a Summer Biathlon-WCH in 1996. The newly built venue undoubtedly is a landmark for the sport of biathlon and will offer the very best conditions for the upcoming world championships. Hochfilzen regularly hosts large numbers of spectators at World Cup events and it is staffed by a well-practiced OC. We are looking forward to enticing and exciting IBU Biathlon-WCH 2017.”

Markus Gandler (Sports Director Biathlon of the Austrian Ski Federation): “A WCH at home is pure excitement. Of course, there is also a lot of pressure on the sports men and women to be defied. Each of the men’s competitions will offer us a chance for a medal. Naturally, that requires also a bit of good fortune which we hope to have on our side with the awesome support of our loyal audience. We have done everything in advance to be optimally prepared for our home WCH.” 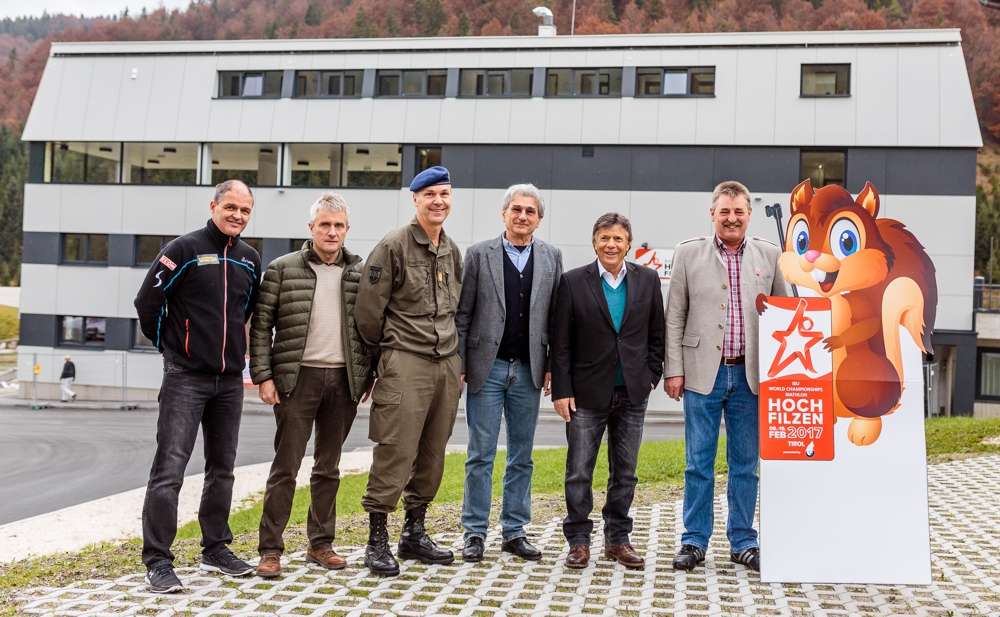